Been a fabulous week in our household but Shh! better not talk too loud as usually as soon as I say that everything turns around.

Firstly I'm so excited to have made a break through in my genealogy  finding the skeleton in the closet in Bears family.  His paternal grandmother took the secrets to her grave, never telling anyone what really happened.  I've been doing a genealogy course for the past six weeks which has been useless.  With Bears permission I posted on good old face book to my friends in the country where his dad was born for HELP!  Within five minutes I had unlocked the missing links and then another friend hopped on board helping even more.  Now I can go way back to the 1700s to his family in Scotland. Modern technology is wonderful in times like these. 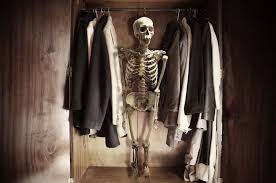 Secondly my photo was chosen on Instagram.  Yipee! This past week we've had to post daily photos depicting emotion prompts.  It's been really hard, so I was most surprised when my sad, lonely egg made the Fab Four.  This is my photo and monologue below. 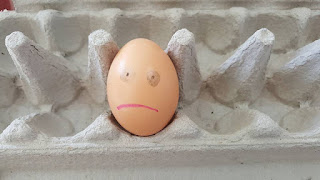 August 23rd SAD I'm so sad! All my family and friends have left me behind. I hear them giggling and yelling. I want to be sunnyside up on warm toast. Or have some handsome buttery soldier dipping into my core. As for those girls at No. 96 oh la la! Do they not have any shame screaming with delight as they're being whipped with a wisk. Makes my insides quiver.
Yet here l am all lonely and sad in the dark, cold fridge. Please invite me over to your plate so I can sidle up to those crisp bacon pieces.


The weather is slowly improving around here and so is my Bear at last.  I was on the receiving end of at least three playful spankings this week through being cheeky.  Our usual night time ritual we say good night, have a good sleep and I love you.  One night I told Bear I loved him more than he loved me.  He immediately responded by saying "Is that so,  you're going to cop it girl, roll over on your tummy."  Next thing he was warming me up with hard swats quite nicely, a late night spanking is way better than taking sleeping pills. 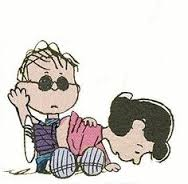 Bear has been quick to give me swats when passing in the kitchen.  Of late he seems to take a delight, as when he swats me Frankie jumps up to either bite my bottom or maybe to protect me.  Either way Bear thinks its funny.

Hope you all have a wonderful weekend full of fun and plenty of gg spanking.

Hello from down under on this very cold, wet winters afternoon.  Only 9 more days until Spring, thank goodness, hopefully it warms up slightly.  The weather has been teasing us with one warm day, usually in the middle of the week.  During this week it reached 25c with hot winds then right back to 12c since.

Found these things in our Sunday Herald/Sun thought you might be interested.  Think spanking might be catching on down here with this cartoon.  What do you think? 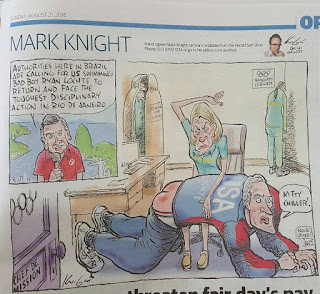 Then there is this article about revamping your sex life, love number 3.  Write down what you want and open an envelope monthly.  WHAT!   Why can't we have kink all the time? Maybe the sexologist needs to talk to the cartoonist to  know more about kink. LOL!

Enjoy your weekend everyone and I hope you are experiencing some sort of kink. Please send some warm weather down south to us.
Hugs Lindy

Firstly I will tell you things have improved since my last post.  Bear and I have talked, he has revisited his specialist, which has solved part of the problem causing his depression.  Men why don't they communicate, if it was the other way around I would be in so much trouble.

During the week Bear called me into the lounge room for what he said was a cuddle.  It was a beautiful warm winters day, so I had all the doors and windows open to air the house off. On my way past Frankie I accidently stood on his paw and without thinking said "Oh shit, sorry didn't mean to do that."

Instead of a cuddle on arrival in the lounge Bear said come over here.  He pulled me down over his knee and spanked me really hard.  One of his favourite sayings is "What would your mother say."  if I do something.  Our couch is L shaped and where he sat was right near the open front door.  I was shocked saying not with the door open what if someone comes.  Bear replied stick your head around the corner, say you won't be long as you're just having your bottom spanked for swearing. We both ended up giggling even though I had a roasted bottom.  What I said on PKs post about turning up the heat down under being a double meaning,  has come true.

Second, luckily I had my brain engaged today,  Bear has decided its time to try the church down here. After the service today whilst having a cup of tea, one parishioner introduced herself to us.  She told us she is leaving on a months trip to Colorado to visit her twin sister during the week, so won't see us until she returns.  The mention of Colorado had my mind on Corbin's Bend, I might have glazed over thinking of the books.  LOL!

Advice to self....Stay focused Lindy and not daydreaming about spanking books whilst in church.

Have a good week everyone, hope you are all well and receiving plenty of fun spankings.