Bear decided we should rekindle our date nights which we used to do when he was working.  The reason we had them then, was because of him working shift work. Saturday night was the only opportunity we had to eat together.  So what better timing than on the night of the Super Moon. 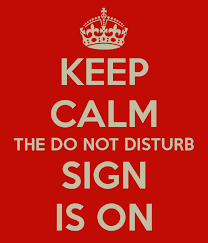 I always find super moons and full moons very romantic. Last night Bear cooked a delicious roast lamb,  roast vegetables and  home made  tzatziki.  We had dinner by candle light with a bottle of red wine, then watched a movie afterwards.  This is an unusual occurrence in our house as Bear normally doesn't watch tv. So it was extra special being able to snuggle together on the couch.

Before we adjourned into the lounge room, we popped outside to view the moon.  Luckily we timed it correctly as it is always cloudy here on special nights and we only caught a glimpse of the moon for approximately five minutes. Anyway the glimpse we did catch was spectacular. 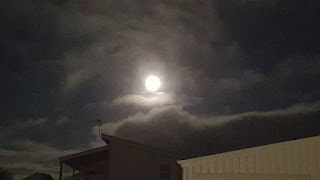 Over all it was a very romantic night. I will leave the rest up to your imagination.
at August 30, 2015 10 comments: 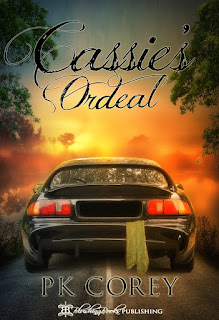 This is definitely one book you need to purchase on Amazon, Cassie's Ordeal. It is by far the best  book written by PK Corey which is mainly in Cassie's own words with a few words from her friend Sue.

This book will have you on the edge of your seat, holding your breath in anticipation one minute, then crying with happiness the next.
Poor Cassie goes through so much with all her adventures  and Tom wielding that nasty ivory brush.  OUCH! So don't hesitate buy it now, you won't regret it.

Funny you wrote in your story today about  a get out of jail free card,  Sunny.  We drove interstate to do some shopping today, which was a three hour return journey on a very uncomfortable derriere from yesterdays spanking.  Think I have more bruises from yesterday than I have had my whole life. LOL!

Anyway along the way I was wondering do you all have written agreements to cover  your HOH if you get taken to hospital or something similar after a session which causes bruising? When I first started reading blogs I came across Learning Domestic Discipline by Clint and Chelsea where they said you should sign a contract.

When I brought this up with Bear at the time he said no way, he didn't think it was necessary.  Yet he does worry about our neighbours hearing us and dobbing us in. Should we have something in writing to cover times like now where I am covered in bruises to stop Bear being accused of assault?

So I am sitting here on a cushion  as received my first punishment spanking from Bear. Lindylou has been very naughty lately and wound tight with all the stress that is going on around here.

This morning Bear was in the middle of his exercise regime and I was about to put my socks and sneakers on for my walk.  I sat down and he asked me what is going on, as he knew things were not great.  After a lot of prodding I finally let it fly with a heck of a lot of F- bombs  amongst other things leaving my mouth voluntarily. Lets say I told him so much in a very short period of time his head was spinning.

Looking at his face I could see he was getting furious with me, yet silly Lindy kept up.  Even saying what do you care you don't f.... love me anyway.  Oops that was the final straw.

My Bear is usually placid with me and doesn't believe in punishment spankings.  He prefers the fun types and so do I.  As you would have read in my previous blogs we usually end up giggling whilst he plays the bongo drums on my backside.

Not this time.  Oh no, I was marched into the bedroom and made to bend over the end of the bed.  No warm up spanking or anything.  He retrieved his heavy belt which he has never used before from the wardrobe and started straight away with such heavy strikes I thought I was going to die.

He continued on for quite a while and I was finding it hard to stay in place.  I kept getting up and dancing around trying to stop the shocking pain.  Bear kept pushing me back down and said I had been asking for this for a while and I deserved it.

After what felt like forever I stood up  jumping around again and pleaded for him to stop.  I even said I felt like I was going to faint if he whacked me anymore.  He wouldn't listen though and pushed me back down. My flight or fight kicked in so I quickly stood up and started running around the house.  Mind you I had my pants and panties around my ankles so this was not one of my good ideas.
Bear chased me whipping my bottom as I went. Until he was satisfied I was well and truly  punished.  Then he admired his handy work with all the red welts.  He asked me if I felt loved now, which I replied yes.

Then the fun part started and he gave me some really nice after care and we stayed in bed cuddling until lunch time. All day though he asked to inspect his handy work and kept giving me swats to bring the red glow back. So my poor bottom is nicely bruised and still is sporting several welts even ten hours later.

Bear was happy that this has brought back harmony in our house.  Don't think I will be mouthing off again too soon if I can help it.

My family really hates August.  Every year we say we take a deep breath on the 31st July and release it on 1st September.  The reason being is because it seems to be the month where most family members decided to grow their wings and go to heaven.

My mum died on 12th August, 1978 a month after Bear and I were engaged. This was so hard going through our wedding and having  babies without my Mum to support me.  I am the youngest in the family, so she saw all my siblings married and their children born.  I felt deprived.

Then my Dad died when I was pregnant with my last baby after being in hospital for a few months.  This was torture. Seeing I was pregnant I was not allowed to see him as they thought he had something contagious. When he finally was given the all clear,  I made arrangements to visit him with my eldest children, I received  the dreaded phone call to say he died that morning.  Great timing Dad! Anyway it took me years to actually believe he was not coming back as I kept expecting him to visit me.

Four years ago we thought we had made it through August and were ready to breath our collective sighs, when Bears mum died on the 31st from Alzheimers disease.  We knew she was going down hill rapidly but hoped she would make it through August.

Mind you all my children's partners have birthdays in August, so maybe this makes up for it.  Also Bear retired two years ago on 16th August, which we celebrated with a candle lit dinner the other night.

Unfortunately I am yet again waiting for the dreaded phone call about my brother.  Just hoping he can hold out for a while longer, although the poor guy is suffering so much.  He was diagnosed with prostate cancer way back in 2004 and has fought a really hard battle with ups and downs ever since.   It has now gone right through his body and he has certainly endured more than he deserves.

So at the moment I am totally stressed worrying about my brother.  I asked Bear the other day for a stress relief spanking when he came into the lounge room to sit with me. He didn't have any implements with him unfortunately.  So although the spanking was starting to make me feel relaxed it was over way too quickly.  He complained his hand was hurting. Boohoo! So I suggested getting an  implement but he wouldn't.
Have you ever had one of those spankings where you would have loved it to go a while longer?
at August 18, 2015 12 comments: 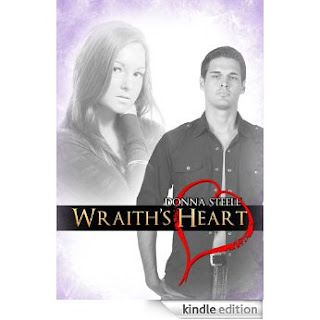 Just finished reading this book written by PK's friend Donna Steele.  It was fantastic, I couldn't put it down.  I would recommend buying it from  amazon.